“If someone had told me when this journey began that I would be in a boudoir glamour shoot radiating confidence with an ostomy bag I would have laughed at them and then silently cried about it later. “

It was something I had on my dreams list but didn’t dare to think about after getting an Ostomy. It would have just been another thing that would depress me on the list of things I thought never possible again. I hated getting naked and couldn’t stand to look at myself in the mirror. I had gone from never being home to shying away from all social settings and avoiding photos where at all possible. Something I only recently began to regret. There are huge gaps in my memory that photos could have helped fill. I never realized how significant a part of my life it would be given all I wanted to do at the time was forget it was happening. 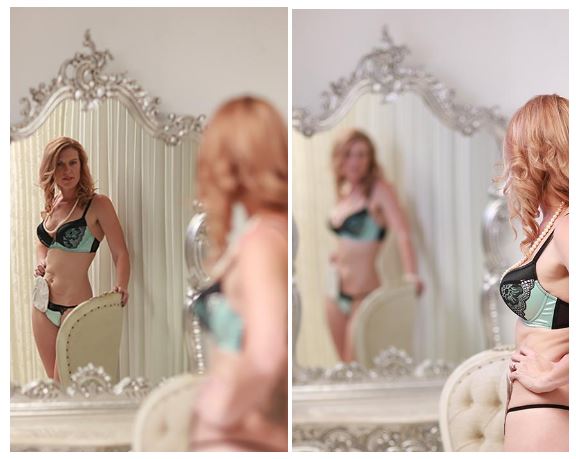 “I couldn’t look in the mirror at myself without crying, but over time and with the support I learned to love myself again.”

Back to the point of the story, how did I get from there to end up in a boudoir glamour shoot? Right time and the right place, I won it. I’d been working hard at the gym, I was in the best shape of my life, and I had just started my blog. So I thought why not. What have I got to lose, if don’t like any of the pictures I don’t have to buy them. It all conveniently happened to coincide with my husband and my fourth wedding anniversary, so I asked him to come along and join me in the shoot. He always makes me feel sexy and a confidence boost when you are about to get in front of a camera in front of a stranger in your underwear never goes astray.

If I told you I wasn’t nervous walking into the studio I would be lying, I must have packed half my wardrobe into bags to bring to the shoot and then brought more on the way. I had no reason to be concerned, soon after arriving my nerves were put at ease. Co-owners Katherine Loh and Kelvin Chong at Image Style Studio make a great team, after helping me sort the masses of outfits I brought with me down to the final three, Katherine did my hair and makeup prior to heading into the studio with Kelvin for the photo shoot. Kelvin was great, I had prepared him for the bag and he had even read my story online. He asked questions to clarify his understanding and showed genuine interest.

Best of all he made me feel comfortable and gave great direction that although sometimes painful to hold was easy to understand.

After each set, he showed us the photos prior to moving onto the next theme to ensure he got the shot we wanted. I was amazed to see how great the photos looked, each viewing gave me more confidence in the process. After two sets it came to the boudoir section, time to bare the bag. It was easier than I thought especially when my husband joined me for a Kelvin Klein style shoot before baring it all for our private anniversary pictures. Kudos again to the team at Image Style Studio, the photos turned out amazing. I look and felt the like a movie star. I know that some people will look at the pictures and see only the bag but everyone I have shown so far has had to look twice sometimes three times even to notice the bag.

Now I really do understand if right now you are not at the stage of baring it all in front of your partner let alone a photographer. It’s taken me ten years, seven years of that with a super supportive loving partner to gain this confidence. However, you need to know that where ever you are in your self-confidence journey, you can feel sexy, beautiful and most importantly human again.